In line with the Law on Election of Members of Parliament, the Republic Electoral Commission in PERMANENT composition comprises: 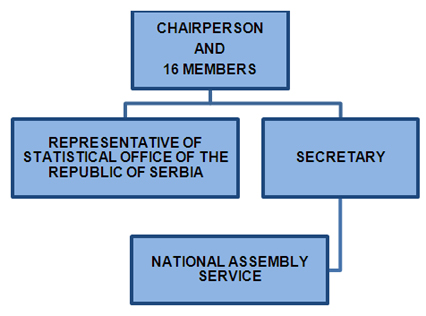 Secretary of the Republic Commission is appointed by the National Assembly from the ranks of the experts employed with its Service.

The Secretary shall participate in the work of the Commission without the right of decision-making.

The representative of the Statistical Office of the Republic of Serbia shall participate in the work of the Commission without the right of decision-making.

The president and members of a polling board shall have their deputies/substitutes.

Deputies/Substitutes shall have the equal rights and responsibilities as the members they substitute.

The Chairperson, members of the Republic Electoral Commission and their deputies/substitutes must be bachelors of law. 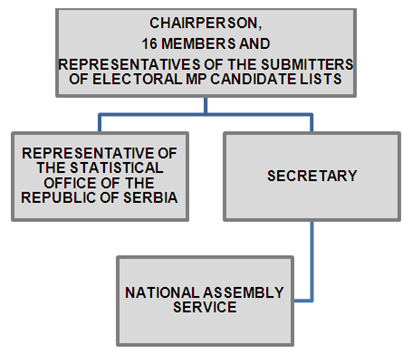 For the purpose of examining particular issues from its scope of activity, preparation of draft regulations, reports and other documents, and for undertaking certain electoral activities, Commission may establish working groups from the ranks of its members.

Representatives of the state institutions and organisations may take part in the operation of the working groups in order to provide expert assistance.

The Decision on establishing the Commission shall lay down its tasks and composition.

Commission does not have its own service, i.e. its permanently employed service, but the Service of the National Assembly shall provide necessary expert, administrative and technical assistance during performance of the tasks for the needs of the Commission in compliance with Law on Election of Members of Parliament and the National Assembly Decision on organization and operation of the Service.